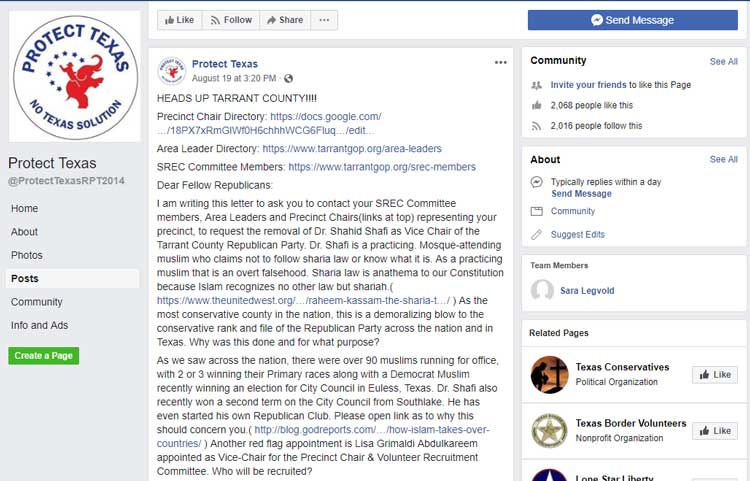 (DALLAS, TEXAS, 8/22/2018) – The Dallas/Fort Worth chapter of the Council on American-Islamic Relations (CAIR-DFW) today called on Texas Republican leaders to repudiate calls to remove a party leader because he is a “practicing Muslim.”

Yesterday, the Fort Worth Star Telegram reported that Republican party member Sara Legvold posted an Islamophobic rant on Facebook in which she called on Republican leadership to remove Dr. Shahid Shafi from his post as vice chairman of the Tarrant County GOP.

During her rant, Legvold complained about the number of Muslims currently running for office in America as well as the recent DFW-area elections of Democratic Muslim attorney Salman Bhojani to the Euless City Council and Dr. Shafi’s reelection to the Southlake City Council.

SEE: Euless’ First Muslim Council Member Says Goal Wasn’t to Win, But to Show That Anyone Can Run for Office

“It’s time for GOP leaders to take their party back from the Islamophobes and racists who are dividing our nation on religious, racial, gender, and ethnic lines,” said John Janney, executive director of CAIR-DFW. “Under the Constitution, there can be no religious test for voting, holding public office or for being an American.”

He thanked Tarrant County Republican Party Chairman Darl Easton, who appointed Dr. Shafi to his party post, for calling the demanded removal “disgusting.” Easton told reporters, “It’s very embarrassing to me that the party is doing this.”

Janney applauded Easton and other Republicans who have rebuked Legvold’s for her Islamophobic rant, but said there needs to be more assurances that Muslims involved in political activism — regardless of party — are not targeted for marginalization.

In a 2014 Texas Observer article, journalist Christopher Hooks describes Legvold as “a nearly bottomless fountain of paranoid racism.” Hooks also pointed out that she “has characterized Muslims as ‘vermin,’ ‘threats’ and breeders” and called New Jersey Governor Chris Christie a “Muslim Dhimmi” after he appointed a Muslim to his advisory panel.

CONTACT: CAIR-DFW Executive Director John Janney, 469-998-2243, This email address is being protected from spambots. You need JavaScript enabled to view it.