The DFW Chapter of the Council on American-Islamic Relations is calling on municipal courts to allow head coverings after receiving complaints from people who've been told they can't enter a courtroom.

But in a Facebook video, she said she was told she couldn't go inside the courtroom because of her head covering. She told court employees she wore it for religious reasons.

Now, the Dallas Fort Worth Chapter of the Council on American-Islamic Relations is calling on municipal courts to allow people wearing religious head coverings inside their courtrooms. A Muslim civil rights group is calling on municipal courts to change their policies so that people wearing head coverings for religious reasons are allowed in the courtroom.

The Dallas-Fort-Worth chapter of the Council on American-Islamic Relations (CAIR-DFW) held a press conference Thursday afternoon outside of the Haltom City Municipal Court after Kendra Montemayor posted a video on Facebook saying that she was told Tuesday morning she couldn’t enter the courtroom because of her hijab.

The municipal court updated its policy to allow head coverings for religious reasons.

(DALLAS, TX, 12/9/2020) – Tomorrow, Dec. 10, the Dallas-Fort-Worth chapter of the Council on American-Islamic Relations (CAIR-DFW) will hold a news conference outside of the Haltom City Municipal Court to call on the court allow religious head coverings inside the courtroom after a Muslim woman who was told that she could not enter the courtroom because she was wearing an Islamic head scarf, or hijab.

CAIR-DFW, a chapter of the nation’s largest Muslim civil rights and advocacy organization, said a viral video posted by a Muslim woman indicates she was told that she could not enter the courtroom because of her hijab.

He said CAIR-DFW will work with Judge Irby and the municipal court to highlight the importance of allowing religious head coverings and to seek an apology for the Muslim woman who was not allowed to enter the court.

CAIR-TX DFW is calling on all municipal courts to change “no hat” policies to allow for the wearing of religious items in Dallas Fort-Worth and across Texas.

CONTACT: CAIR-DFW Executive Director Faizan Syed, (469)290-2909, This email address is being protected from spambots. You need JavaScript enabled to view it. 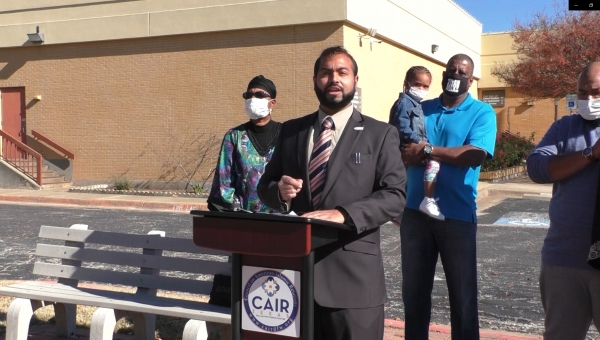 Press Conference: CAIR-DFW Calls on All Municipal Courts to Allow Religious Headcoverings, like the Hijab

After a woman wearing a hijab complained that she wasn’t allowed in the municipal court to pay her speeding ticket, the city changed its policy to allow head coverings for religious reasons.
Kendra Montemayor went to the Haltom City Municipal Court Tuesday afternoon where a bailiff told her that head coverings weren’t allowed.
The Dallas-Fort-Worth chapter of the Council on American-Islamic Relations (CAIR-DFW) is holding a press conference outside of the Haltom City Municipal court at 1 p.m. Thursday to highlight the need for courts to change their policies about head coverings.
Read more click here...

After Biden’s Win, US Muslims Brace for More “Sophisticated” Activism

A continued push to register voters as well as active and sophisticated engagement on repealing travel bans and advocating for immigrants with elected officials are two of the ways Texas Muslim leaders said activists can continue to advance their political agenda following the election of Joe Biden as the 46th president of the United States.

Mustafaa Carroll, the executive director of the Council on American-Islamic Relations (CAIR) Texas, along with Nahela Morales, a regular contributor to AboutIslam, co-founder and marketing director for convert organization Embrace, both spoke during a recent panel session hosted by CAIR.

The event also featured Houston-area activists, including those working with immigrant and environmental organizations, as well as a representative from the Texas Democratic Party and the Houston City Council.