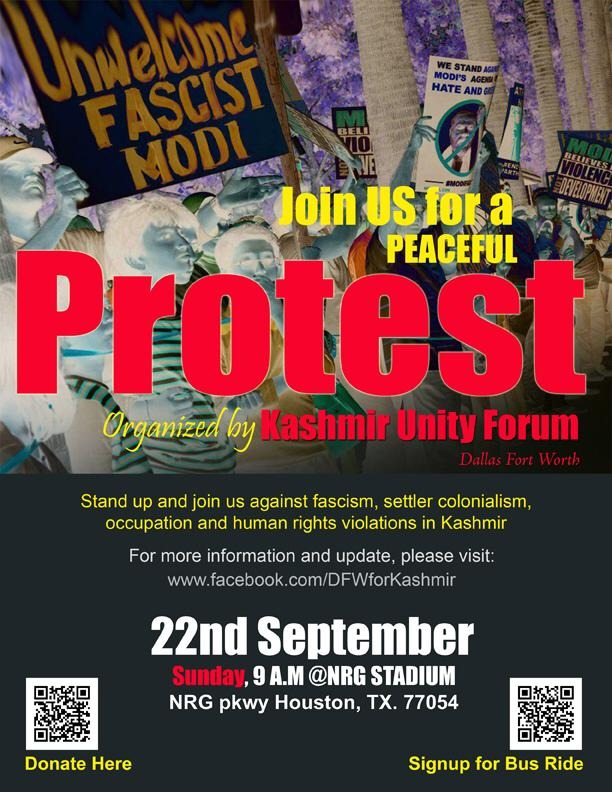 The situation in Kashmir continues to be bleak. For a month now the people of Kashmir are living in fear. The fascist government of Prime Minister Narendra Modi is keeping the Kashmiris under prolonged curfews and cut off from the world. They have been denied internet and phone access. Any attempt at protest is dealt with excessive force by the massive Indian force deployed there. Working under severe restrictions, some of the media outlets and human rights organizations have reported of detentions and atrocities against the people of Kashmir.

Here in the Dallas area, the Muslim community is planning to take busloads of people to Houston on September 22 to protest in front of NRG Stadium inside which Modi is scheduled to address his supporters. CAIR-DFW will share more details as they become available.

Protest is also planned in New York on September27 in front of the United Nations where Modi will speak to the UN General Assembly. May protests have already been held across the nation and many yet are planned for the coming days.

Against Modi’s long history of anti-Muslim and anti-minority bigotry, it is shocking that Bill and Melinda Gates Foundation is planning to award Modi on September 25. We urge all people of conscience to sign the below petition asking the Gates Foundation to rescind the planned award to Modi.

Petition: Gates, Do Not Award Modi

To donate for Houston trip: https://www.gofundme.com/f/stand-with-kashmir

To sign up for the bus ride to Houston on September 22, contact any of the following places: